Roukes, the Robert M. Abbey Professor of Physics, Applied Physics, and Bioengineering, says the collective sense of unease over the new policies prompted faculty members to organize the gathering, the largest of its kind on campus in more than 40 years.

The event featured comments from 15 additional faculty and students—including two Nobel Laureates—addressing the uncertainty and difficulty that travel restrictions have caused and highlighting the important contributions of scholars from abroad.

In her remarks, Dianne Newman, the Gordon M. Binder/Amgen Professor of Biology and Geobiology, emphasized to the audience that freedom of travel is crucial both personally and professionally.

"I'm alive today because my grandparents and great grandparents came to America fleeing the pogroms in Eastern Europe at the beginning of the 20th century," she said. "My PhD mentor is French and my postdoctoral adviser from Guatemala. Many of my postdoctoral scholars and graduate students are from overseas or are first-generation Americans."

Listing 20 countries from which students and colleagues supporting her work hail, she added, "My research would not have been possible, much less successful without the contributions of these people. In my opinion, any policy that limits the ability of talented individuals to come to the United States to pursue the American Dream is a betrayal of our country's most noble principles."

Throughout the event, members of the audience crowded around a poster-sized scroll to sign their names to a statement of support for "the international members of the Caltech community who have been affected by travel restrictions." Several dozen signatures in various colors had already covered the scroll as the last speakers came to the podium.

In her comments to the crowd, Giuliana Viglione, a geological and planetary sciences graduate student, said that with nearly half of graduate students being international students, the campus is necessarily affected by changes in federal travel policy.

"Our diversity should be celebrated, not castigated," she added. "Our international students should be championed, not condemned." 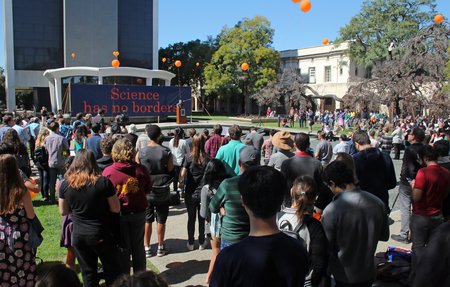 More than 500 people flocked to the March 1 gathering at Millikan Pond to support international members of the Caltech community. Credit: Caltech
Image Lightbox 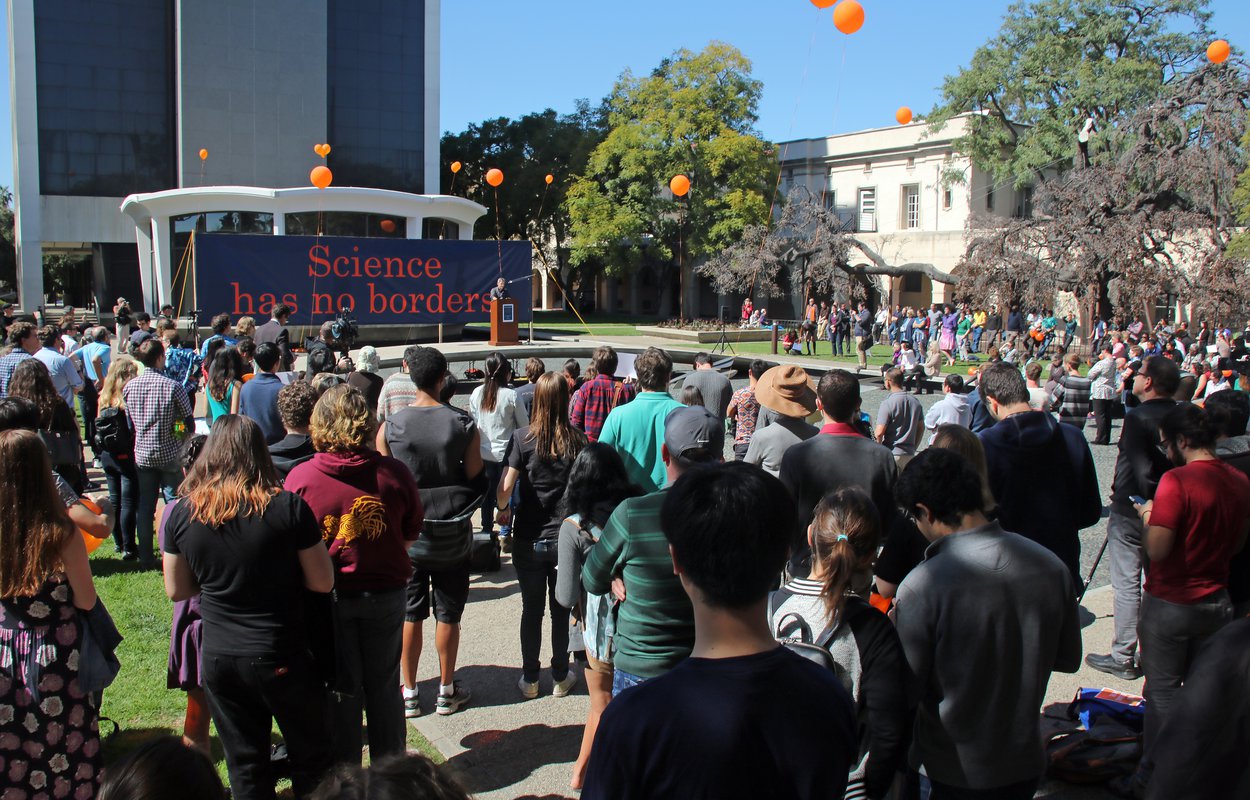