Deprived of Oxygen, Layers of Bacteria Get Creative

Bacteria are found living nearly everywhere on our planet, from the inside of human intestines to the soil to deep underwater. When scientists study bacteria in the lab, they most often examine individual bacterial cells as they grow rapidly in liquid cultures. However, bacteria in nature usually exist in the form of structures called biofilms—dense populations of cells attached to each other and to surfaces with a matrix of sticky goo.

To conserve energy, bacterial cells normally remove electrons from sugars and transfer those electrons to oxygen molecules. While oxygen is plentiful at the surface of a biofilm, there is very little of it at the bottom, creating a puzzle for biologists: How do bacteria buried at the bottom of a thick biofilm "breathe" if they lack ready access to oxygen or other electron acceptors used to conserve energy?

Bacteria can solve this problem in a variety of ways. In one strategy, bacteria produce so-called extracellular electron shuttles—small, diffusible molecules that are capable of exchanging electrons with a variety of substrates.

Researchers in the laboratory of Dianne Newman, Caltech's Gordon M. Binder/Amgen Professor of Biology and Geobiology and executive officer for molecular biology, have now made progress toward a mechanistic understanding of this process in an organism called Pseudomonas aeruginosa. P. aeruginosa is a model organism for studying biofilms and extracellular electron shuttles. It is also a dangerous opportunistic pathogen: it caused more than 30,000 hospital-acquired infections in 2019, and it is inherently antibiotic resistant. An understanding of P. aeruginosa's metabolic processes could lead to new methods to treat these infections more effectively, while offering insight into the workings of many kinds of bacterial biofilms.

A paper describing the new study appears on August 6 in the journal Cell.

Biologists have suspected that the key to a modified metabolism for organisms like P. aeruginosa lies with molecules called phenazines. Researchers in the Newman laboratory have previously shown that bacteria that cannot produce phenazines also cannot form biofilms; instead, they form structures that are so thin that every cell has access to oxygen. In 2016, Newman and her colleagues demonstrated that biofilm development in P. aeruginosa could be inhibited through the addition of an extracellular enzyme that degraded a key phenazine produced by the microbe.

In this new study, the team focused on the matrix of "goo" that holds a biofilm together to discover exactly how phenazines help bacteria breathe without oxygen. The research was led by former graduate student Scott Saunders (PhD '20) and was conducted in collaboration with researchers in the laboratories of Jacqueline Barton, Caltech's John G. Kirkwood and Arthur A. Noyes Professor of Chemistry, and Leonard Tender of the Naval Research Laboratory in Washington, D.C.

First, the team mapped the distribution of phenazines within a biofilm. To do this, they grew biofilms on top of plates dotted with tiny pores that create a kind of sieve through which phenazine molecules, but not bacterial cells, could escape. These experiments showed that certain phenazines, including a particular molecule called pyocyanin, do not diffuse out of the biofilm but remain trapped within it.

What was trapping pyocyanin within the biofilm? The answer was found in the matrix of material between bacterial cells. In addition to protein fibers and sugar molecules, this matrix contains an abundant amount of loose DNA from cells that have died and spilled their contents into the biofilm. Saunders and his team found that pyocyanin was binding to this extracellular DNA.

The team theorized that the pyocyanin–DNA complexes were somehow relaying electrons from the bottom layers of a biofilm to the oxygen-rich top. And indeed, when they grew biofilms upon electrodes, they were able to show that the biofilms generated electrical current. That current continued to flow when bacterial cells were removed from the gooey matrix, which suggests that something within the matrix—such as the pyocyanin–DNA combination—was controlling the charge transfer.

This led to another question: Were the electrons being handed off between the pyocyanin molecules, like a baton in a relay race, or were pyocyanin molecules physically moving through the film while carrying electrons? To find out, Saunders and his team turned to the expertise of the Barton laboratory, which has, for decades, studied how strands of DNA can act like a wire to conduct charge. The research groups found that the DNA in the biofilm matrix was in fact conductive.

The results, combined with the findings of other laboratory experiments that directly examined pyocyanin–DNA charge transfer, suggest that such a mechanism may contribute to biofilm metabolism. Newman notes, however, that it is also possible that DNA helps trap phenazines within the biofilm but is not required for electron transfer reactions.

These discoveries have led to the first mechanistic model of phenazine–mediated electron transfer in the biofilm matrix—that is, of how bacteria buried in biofilms can breathe.

"I have been studying biofilm metabolism for many years, and Scott's rigorous work represents an important conceptual advance," says Newman. "I am very proud of what he accomplished in his PhD and grateful to all of our outstanding collaborators who made this interdisciplinary project possible."

Written by
Lori Dajose
Contact
Lori Dajose
(626) 395‑1217
ldajose@caltech.edu
Bacteria in nature usually exist in the form of structures called biofilms—dense populations of cells attached to each other and to surfaces with a matrix of sticky goo. While oxygen is plentiful at the surface of a biofilm, there is very little of it at the bottom, creating a puzzle for biologists: How do bacteria buried at the bottom of a thick biofilm "breathe" if they lack ready access to oxygen or other electron acceptors used to conserve energy? A new model for biofilm metabolism answers longstanding questions about how populations of an opportunistic bacterial pathogen thrive. Credit: Newman laboratory / Caltech 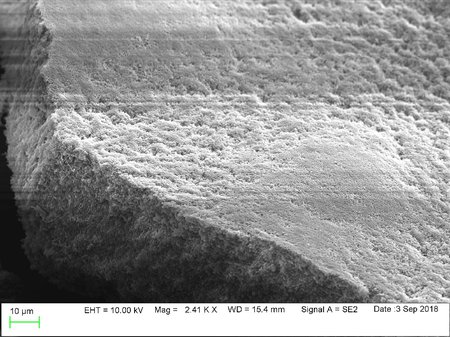 This scanning electron micrograph (SEM) shows cells in a fixed Pseudomonas aeruginosa colony biofilm. The crack in this fixed sample reveals the many layers of densely packed cells that make up the biofilm structure. This biofilm mode of life gives these cells protection and can result in antibiotic resistance / tolerant infections, but the cells also cause a problem for themselves. The upper biofilm layers respire oxygen faster than it can diffuse to the bottom, effectively suffocating the lower layers. However, these cells have a strategy to overcome this oxygen limitation. Credit: Courtesy of the Newman laboratory
Image Lightbox
Subscribe
The Caltech Weekly